Seeing the Marucci Cat 7 Connect BBCOR in action can be a real shocker, especially when you compare its performance with the previous Cat 6.

It’s a truism in consumer goods that a new model is only a little bit better than the version on which it was based. The Cat 6 was the brand’s BBCOR flagship model, and it was excellent.

So for Marucci to even match its capacity was a challenge. Improving upon it is a tremendous success, even if the improvements were slight.

But the significant upgrade that the 2017 Marucci Cat 7 Connect BBCOR represents seems like a truly revolutionary step up. The boost in features and performance will even have current Cat 6 owners tempted to go for the new model.

So let’s proceed with this Marucci Cat 7 Connect review and see what’s in store for us. As most people who play in high school and college baseball leagues know, BBCOR standards have been blamed for lower scores ever since their introduction in 2011.

In fact, BBCOR standards were introduced because bats at the time were just too effective.

So nowadays, these new standards keep the non-wood bats at performing only a little bit better than wooden bats.

But that doesn’t stop brands like Marucci from trying to buck the trend.

The Cat 7 Connect is for power hitters. It’s designed to really help homerun hitters to maximize their potential.

The BBCOR-certified Marucci Cat 7 Connect comes with a -3 drop ratio, and its barrel measure 2 5/8 inches. But that’s not really where the fun begins:

Is This a One-Piece or Two-Piece Bat? 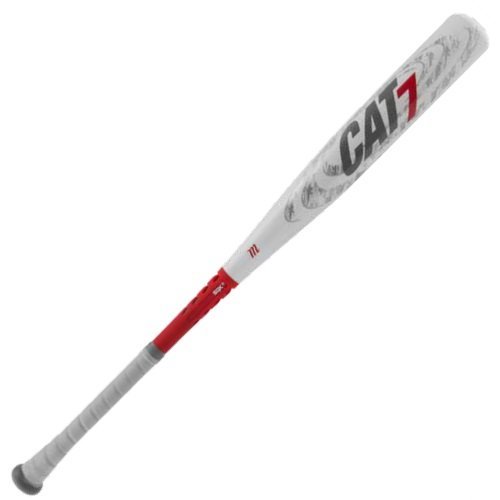 What About The Handle and the Grip?

Watch this video to see all the ins and outs of this bat. Play it all the way through because it lists every single feature.

The Pros of the Marucci Cat 7 Connect BBCOR

Let’s first define who this bat is for. This isn’t for spry Ichiro-types who can spray singles and infield hits all day long.

This bat is for well-muscled Mark Trumbo-types who love to swing for the fences.

Only these strong players have the strength to actually control the bat so it goes where they want it to go.

The MOI is formidable, so it’s like wielding a heavy sledgehammer which has most of its weight at the tip.

You have to be very strong to wield such a bat, which explains why Barry Bonds became a home run king when he suddenly developed huge muscles.

And just about every feature of the bat is designed to make sure that this home run king gets all the help they can legally accept.

Here Are the Features Summarized

There are just 2 concerns with the Cat 7 Connect:

If you’re in the market for a new bat, and you’re a power hitter, then this bat has your name written on it somewhere.

As you read from this Marucci Cat 7 review this bat offers you the weapon you specifically designed to match your power, and your hands are protected from the sting of mishits.

Get the Marucci Cat 7 Connect BBCOR and see your home run and extra-base hit stats explode with this bat.