When you read some of the Akadema baseball glove reviews, you may detect a hint of surprise when they say it’s good.

That’s not surprising, as the brand is not yet on the same household name status as Rawlings, Wilson, and Nike. It’s actually a very recent startup, as it was founded in 1998.

While other brands emphasize its history, Akadema focuses on the here and now, and they look to the future.

One of its founders played in the minors, and they know the value of getting the input of professionals in creating the gear that the best players really want.

It’s why they’ve solicited the advice of legends in creating their gloves. The Akadema baseball gloves have become a sensation, and they continue to revolutionize the game with their innovations.

A lot of college coaches also praise this brand of glove so let’s take a deeper look below at these Akadema baseball glove reviews.

Just want to see all the best Akadema gloves now?

==>> Learn all about these gloves here 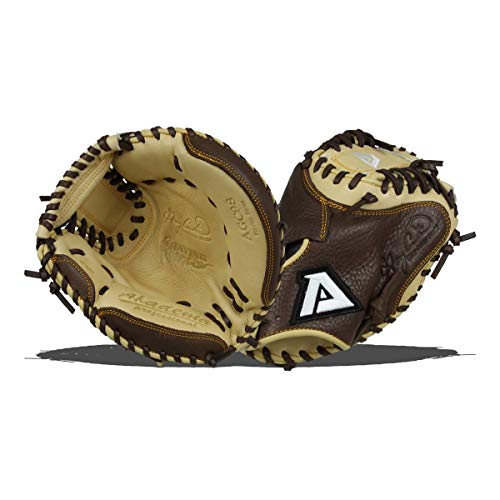 For the catcher, Akadema teamed up with Hall of Famer Gary Carter to create the Akadema AGC98 Prodigy Series Glove.

As various Akadema catcher’s mitt reviews will attest, the baseballs caught with this mitt stays caught.

in the picture: Akadema AGC98 Prodigy

They don’t squirt out, and so you won’t have to suffer the possibility of having a batter strike out and still reach first base.

It’s all because of the now-famous Praying Mantis design, which is part of the glove’s DNA.

That design was revolutionary when it first came out more than a decade ago, and today its imprint is seen in many of the catcher’s mitts made by Akadema.

Its long list of features includes the “Stress Wedge” technology that provides reliable protection against the continuous shock of catching baseball pitches.

Catchers minimize the risk of injury, and even the sting is reduced when they get the ball in the mitt.

Then there’s the two additional Finger Hammocks, which lets the fingers stay secure and firmly in position in the mitt.

The Double-Sided Slim Padding boosts the size of the pocket and makes it easier to retain the ball.

The Double Flexhinge feature lets the mitt snap down quickly upon contact with the ball.

Even its unique shape lets the catcher transfer the ball quickly to the throwing hand, if anyone dares to steal second base on a caught ball.

I love the looks of these! The leather looks incredible and that’s why I want to give you a list to choose the best Akadema catchers glove.

These look really comfortable and that is confirmed by all the customer reviews of parents saying their kids absolutely love them.

When you think of all the catchers equipment you could possibly have most think about the mitt first and everything else second.

Are you a catcher? What do you look for in a catchers mitt? 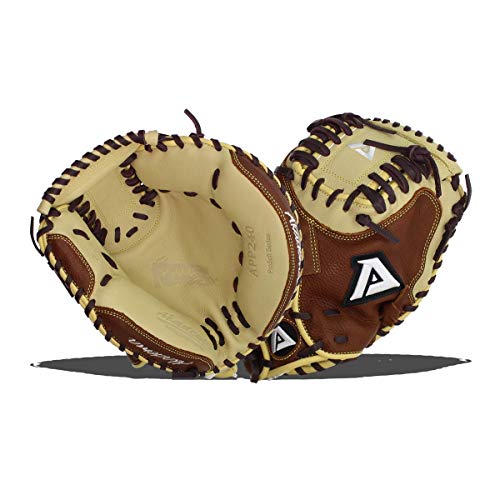 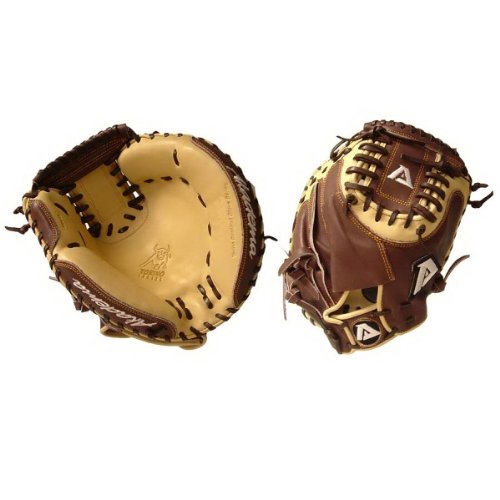 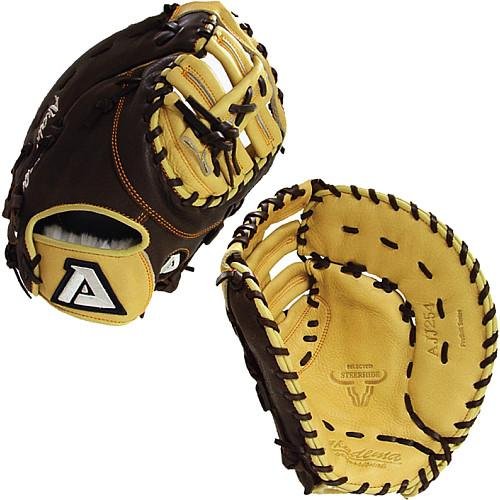 Akadema Professional First Base Glove
The Akadema ProSoft Series was constructed to give a player the unparalleled fit and feel right off the bat.
$124.95
Buy on Amazon

I’m a first base glove junkie! I think they are the most unique gloves and they are very specialized for that position. These gloves are just as important as a catchers mitt.

If I were to pick one mitt today it would be the Precision model because it’s got a super deep pocket and it’s made out of a leather that is super easy to break in.

No matter if you’re a righty or a left handed thrower, there are plenty of quality mitts to choose from.

For young kids who play first base, there’s the Akadema Prodigy Series: AHC94-12 Youth First Base Mitt. It measures 11.5 inches, which makes it suitable for typical 8 and 9-year old players.

This model features a very narrow hand opening and finger stalls, which offers a snug fit for smaller hands.

Its features also include a single post web, a conventional open back, and a very deep pocket to secure the ball thrown by other infielders trying to beat the runner to 1st base.

It’s extremely well-constructed, with firm padding and strong laces that compensates for the strength of the thrown baseballs.

The quality of the leather is superb, and its performance is truly awesome. This Akadema first base glove is very affordable, but the build quality is impeccable.

Based on my in-depth Akadema baseball glove reviews here are the best for first base. 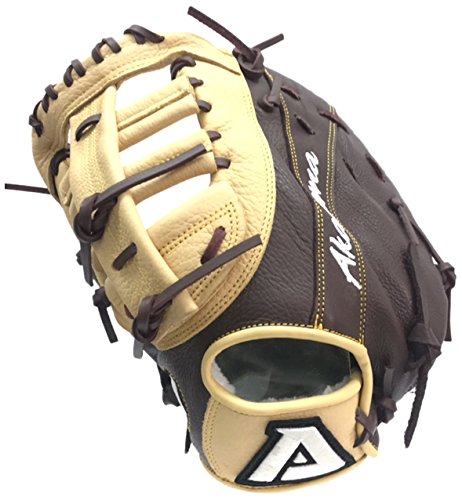 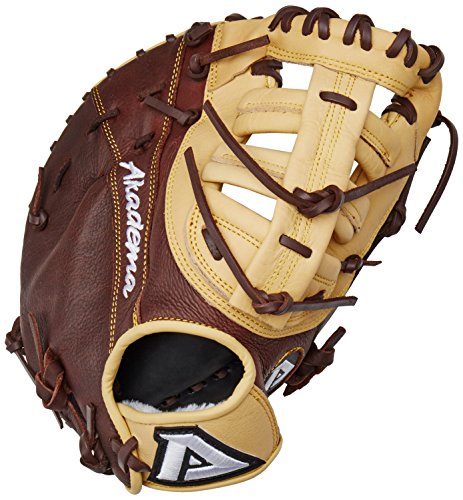 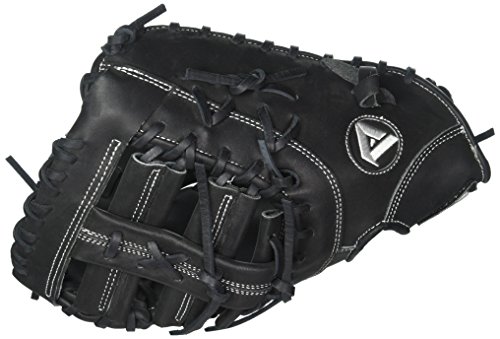 The gloves Akadema has made for infielders have also revolutionized the baseball glove industry.

The 12 inch Ambidextrous mitt is quite popular and people rave about how well it works. 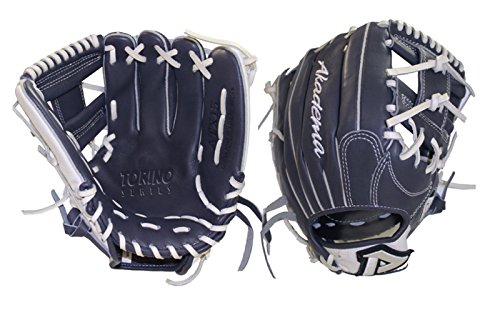 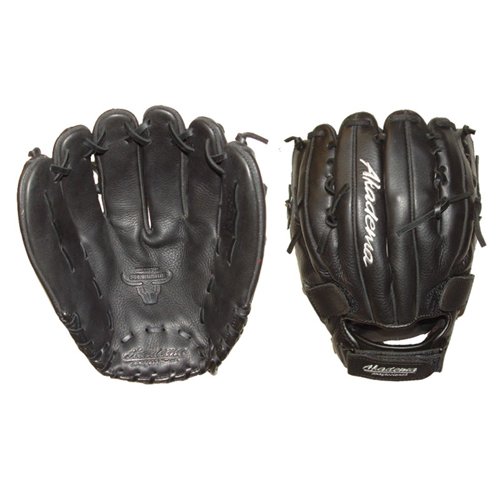 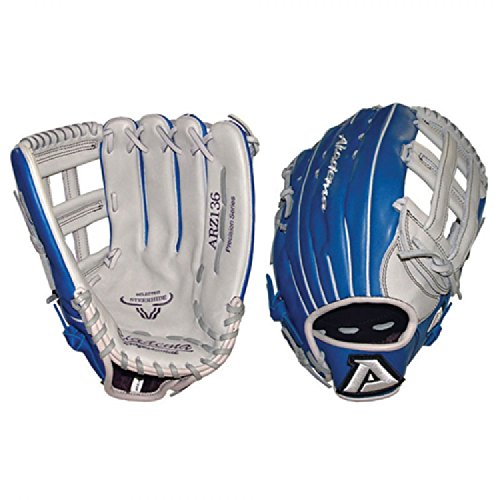 You have several excellent options when you’re choosing among Akadema outfield baseball gloves.

Sometimes I wish I bought a pro series type mitt like the first one listed below. Have you ever used a pro model mitt? 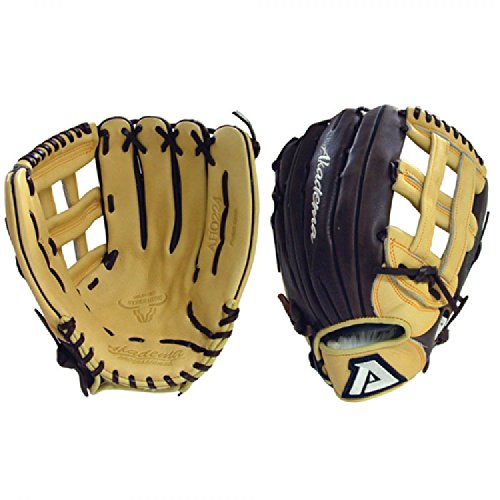 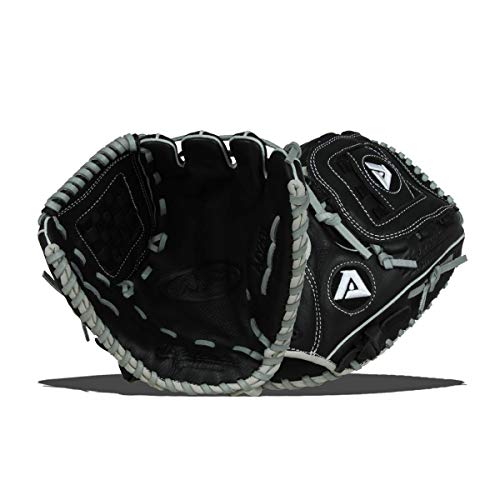 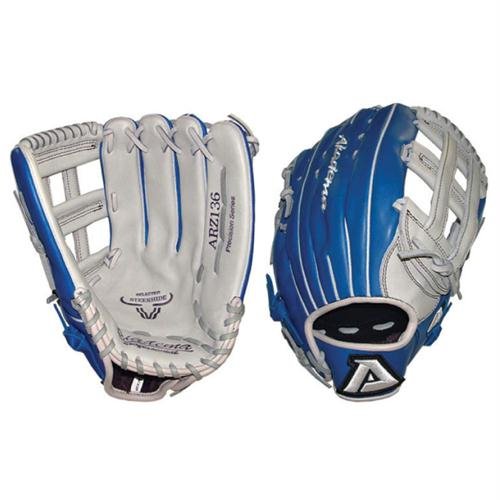 Watch this video of a real player with a real Akadema baseball glove.

If you like to use modern technology that’s within the rules, then the Akadema brand is a great choice.

Other brands point to their history as proof of their excellence. Akadema is making history today, and you’re there to see it and use it.

Judging from the increasing number of Akadema baseball glove reviews, quite a few people are making history today.