Buying a baseball glove is not something you do willy-nilly, not if you want to take baseball seriously.

And there’s no point to playing baseball if you’re not taking it seriously.

It’s for that reason the Nokona American Legend is preferred by so many players, because it’s made for serious players of the game.

There are several reasons why Nokona gloves are prized. That’s the proper spelling, by the way.

Looking for a Nokona catchers mitt online can get you the wrong mitt if you’re not careful, as Nocona is simply the town where Nokona started way back in the 1920s.

The company did have the Nocona name at first, and it was first known as the Nocona Leather Goods Company.

But they had to change the spelling because the US Patent Office didn’t exactly approve of a town’s name being trademarked by a private company.

But what didn’t change was how Nokona continued its meticulous way of making gloves, which it has been doing since 1934.

A Little Bit More About The Nokona Company

The Nokona factory is still in the same town of Nocona, Texas.

Each Nokona glove is handcrafted, and the company has perfected the process.

It includes selecting, cutting, and stamping the leather, along with the embroidery, forming, stitching, and lacing.

The tanning of the leather is performed according to exacting Nokona specifications.

And if you’re looking for someone good to speak for Nokona, then look no further—Nolan Ryan wholeheartedly recommends it.

After all, the Nokona was his first glove as a kid.

Nokona also makes it a point not to pay Major Leaguers to wear their gloves. So when you see one on TV wearing Nokona, he wasn’t paid to endorse the product.

Heck, he didn’t even get a discount on it. He paid full price, because he knows it’s the best.

The Features of the Nokona American Legend

That’s the Nokona legacy that continues on in the Nokona American Legend series. The glove is stiff and sturdy, and it’s quite durable as well.

That’s par for the course for a traditional Nokona glove. As any detailed Nokona American Legend review can tell you, it offers a lot for the price it demands.

While the official Nokona website offers the gloves for $340, quite a few sellers offer it for less.

These gloves are made from the trademarked Sandstone leather for exceptional quality. They require an almost heavy break-in and that’s actually a good thing.

It means you can customize its break-in, and it will maintain its shape for a very long time. The durability of the American Legend is simply outstanding.

These gloves are offered for both left and right hands, so whether you’re left-handed or right-handed you can still avail this beauty. It also features an open back.

Check out the American Legend gloves on Amazon and you’ll see a wide range of options available. The main options are the AL-1150 and the AL-1200. 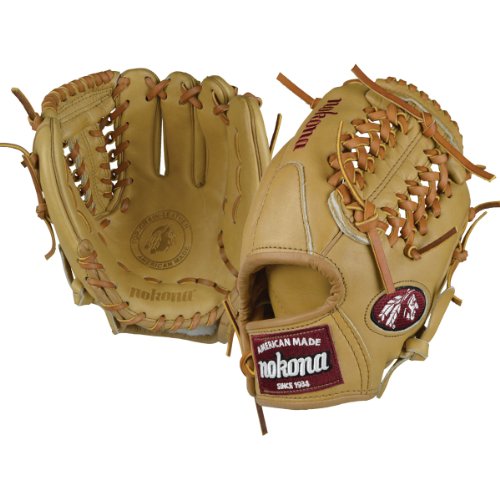 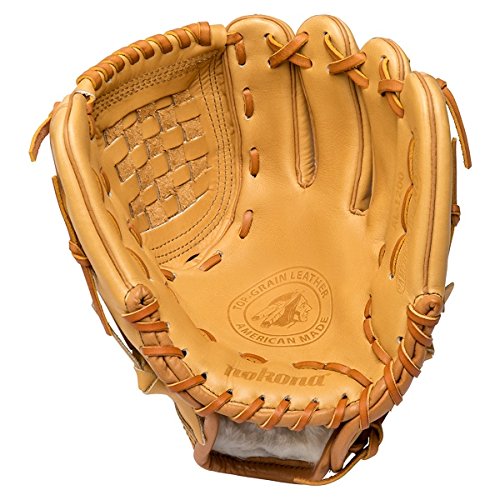 The AL1150 features an 11.5-inch pattern, so it’s suited for middle infielders like the second baseman and the shortstop.

These positions tend to need the smaller pockets for easier transfers and throws, especially for double plays.

But some third basemen and pitchers like it as well.

That may be surprising, as it features a modified trap that’s more designed for middle infielders.

The third basemen and pitchers for the most part do opt for the AL-12oo instead. This glove offers a closed web, which is important for pitchers.

The closed web completely prevents hitters from seeing how they’re holding the ball, and so they won’t be able to easily anticipate the kind of pitch that’s coming.

Obviously, knowing if the ball is going to be a breaking ball or a fastball can help the hitter a lot.

The third basemen also benefits from the bigger 12-inch pattern here, as the extra glove length and the slightly deeper pocket help them to go after ground balls or hard hit line drives.

Now some of you may not take care of your Nokona gloves properly, and if you didn’t know you were doing things wrong you may be tempted to write a negative review as a result.

To prevent that, Nokona has offered a few tips on how to take care of your Nokona gloves, especially when it comes to breaking it in.

Here’s the number one rule: just play with the gloves if you want to break it in properly.

Play catch all day long, and do that every day. It’s summer after all, and you shouldn’t be cooped up at home.

Playing catch with the glove stretches the fibers of the leather and in the padding inside the glove. This eventually conforms and shapes the glove precisely to the shape of your own hand.

The Padding and Use of Real Leather

The padding on the heel of the glove also needs to be constantly stretched to allow for easier closing.

You can speed up this process by grabbing on to the thumb and pinky sides of the gloves and slightly rotating the sides.

You really should avoid trying to speed up the process with improper procedures.

Some have used boiling water, others have resorted to microwaves, and steamers have also been used.

While these techniques may indeed soften the glove, they may ultimately cause the Nokona glove to fail.

The Nokona gloves use real leather, and so it needs to be reasonably moist. You can contact Nokona or go to its website to look for those appropriate products for this purpose.

Oiling the gloves is like using moisturizer for your own skin. It preserves the gloves and prolongs its life.

In general, just play with it day constantly, and avoid the quick fixes that’s not approved by Nokona.

You end up with a Nokona American Legend that fits your hand like a glove. So play ball, and enjoy your Nokona for a long time to come.