This is one of the most advanced aluminum bats out there for coach pitch baseball.

What’s more, it was released early in 2015 so the prices have now tumbled considerably.

It was once available for about $250, but now you can find sellers offering it for less than $99. 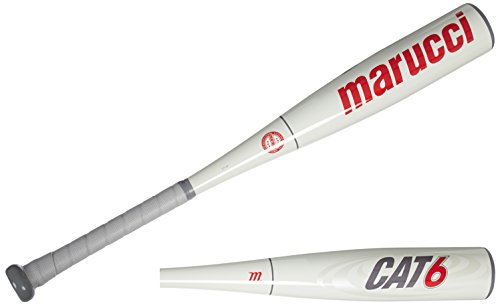 When Marucci released the CAT 5, it was an immediate hit. Its performance made it among one of the best aluminum bats any young player would want.

Of course, Marucci didn’t simply stop innovating, so they came out with an improved version for 2015. And they called it the CAT 6.

Keep in mind, this is for coach pitch baseball, and it’s meant for players who are 5 to 8 years old. It comes with a USSSA BPF 1.15 Certification mark that should make it eligible for just about any baseball league in this age group.

It also measures 2 3/4 inches in barrel diameter, so it’s a good idea to see if that’s permissible in the league your child plays in. One of the things your kid will like about the CAT 6 is that it looks great.

Children at this age like bats to look impressive, and this one surely qualifies.

It makes children feel confident at the plate, and that’s always a good thing. And when you take pictures, years from now your child won’t be embarrassed being seen with a dorky-looking bat.

But of course, for a parent the performance is what really matters, and this bat has proven its worth. That’s one of the advantages of buying something that’s already been in the market for a year.

It’s not really much of a gamble, since you can read up on a lot of Marucci CAT 6 Junior Big Barrel reviews to see how satisfied players and parents are with this bat.

Many players have commented to how comfortable it feels to wield, and this has resulted in better hitting performance.

The anti-vibration technology does its job, while its single-piece construction immediately tells players about how well they made contact with the ball.

The faster swing speed lets the player put some pop to the ball, and the material does offer a nice trampoline effect. And it is already hot right out of the wrapper. On the other hand, you’ll not be satisfied with this bat if you play baseball with faster pitches, or even with a machine pitch.

This is strictly for coach pitch only, and those types of pitches only go at about 30 mph more or less.

It’s not really designed for pitches that go faster than 55 mph. Use it for faster pitches, and don’t be surprised to see dents forming on the bat.

Some people may also be wary about paying $180 for a bat that children will outgrow soon. But that’s exactly the point. You want your child to enjoy playing baseball even as they get older?

If so, then you want to get them a good bat that will protect their hands and will also give them great hitting results.

Children really enjoy baseball when they get on base often and they don’t feel a lot of pain on their hands.

So should you get the Marucci CAT 6 Junior Big Barrel?

If it is allowed by your league, and you only use it for coach pitch baseball, then it’s an ideal bat.

The price may be on the high side, but you’re paying for your child to enjoy baseball while they’re hands are protected.

With its performance and safety features, this bat is actually a bargain.