The Jugs Lite-Flite Pitching Machine from Jugs has been getting a lot of positive reviews of late, and a lot of people say that it’s a very effective pitching machine.

But what exactly is the Jugs pitching machine capable of, and does it really deliver?

If you’re not sure if this is what you need, this pitching machine review can help you decide. 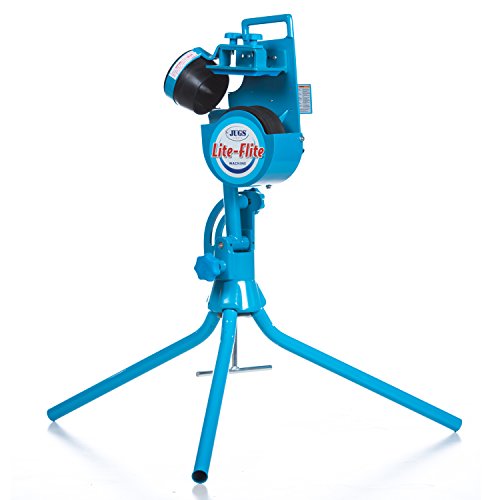 Video Promo – See What You Can Do With This Machine

The Jugs Lite Flite was built for honing swings, and judging from its feature set the Jugs is built for the task.

Aside from being versatile, the Jugs Lite-Flite pitching machine has a complete movement range, and it’s easy to adjust the settings for sliders, curve balls and fastballs.

While the machine has a lot of functions, it’s not that hard to figure out, and the swivel design allows for a full 360, very nice. More importantly, the Jugs can be adjusted for left or right handed pitch throw, a very important feature.

As any hitter will tell you, left handed pitchers throw the ball differently than right handers, which is why you need to practice for both. If you’re new to the game, this machine will help you learn how to swing, and even if you’ve been hitting for a while the Jugs can help refine your hitting.

This isn’t what you’d call a big league pitching machine but it’s great for baseballs and softballs.

One of the more interesting features on the Jugs pitching machine is the delivery system, where you always see the ball.

There’s also a quick change mechanism featuring the proprietary Switch-and-Play knobs, which makes it easy to switch and adjust the setting from baseball to softball and back.

The switching only takes a few seconds, and it is a handy feature that makes it very convenient to use. If you play baseball and softball, you know there are differences between the two, but the Jugs can handle both, which is really cool.

And when you’re done practicing with the machine, you can put the unit inside two carrying bags.

The Flite only weighs 35 lbs., and it is built to last. The machine is also compatible with the rechargeable battery pack that Jugs sells separately.

Even on its own, the Jugs machine works very well and will last a while. When it comes to usability, the Jugs pitching machine is right up there with the best of them. If you want to practice hitting, this will fit the bill nicely.

Although it is designed for 10 to 12 year olds, teens and even adults can benefit from using the Jugs, and it’s safe to use. The recommended age is five to adult. It can reach speeds up to 50 miles per hour.

Unlike other pitching machines, you don’t have to worry about getting bruised or suffering a bone break.

But what really makes the Jugs pitching machine such a valuable tool is its versatility. Because it can throw curve balls, fastballs and sliders, you can tweak your hit for any pitch.

The other thing that makes the Jugs lite flite machine attractive is the movement range it offers, but that’s not all, because with the swivel design you can adjust it 360 degrees for simulating pop ups, ground balls and fly balls.

What this means is the machine is ideal not just for practicing hitters but also fielders who want to improve their defense.

Although it is aimed primarily at hitters as this reviews notes, the Jugs is also suited for fielders. Most Jugs Lite Flite Pitching Machine reviews are very positive, with many commending the built and design.

A reviewer posted online that the Jugs is “great” for hitting as well as fielding and catching. Thomas of Minnesota also says that it’s ideal for kids because it doesn’t hurt like typical baseballs do.

Mark of Portland wrote a review of the Jugs, and he says it’s both safe and cost effective. He also notes: “This machine is ideal for my 10 year old son as I don’t have to worry he’ll get hurt by the baseball…it’s affordable but feels solid…my kids are using it every day and it’s holding up fine.”

Chris of Idaho purchased the Jugs pitching machine after reading the reviews and he says he’s “very satisfied” with how it works. Chris also says that the adjustment features on the machine is the “best” he’s seen in these types of pitching machines.

To give you an idea of how good the Jugs lite flite machine is, it’s gotten a lot of positive reviews from baseball and softball trainers, who agree that it helps you get the most out of your swings.

Other reviews about the Jugs pitching machine have been posted online, and like those above, they’ve been mostly positive. Although there are a few negative reviews here and there, the majority of those people who purchased the product are satisfied with it.

The Jugs Lite-Flite Pitching Machine is an outstanding training tool.

Its support for softballs and baseballs is nice, and its ability to dish out curve balls, fastballs and sliders is as good as they come.

The build is solid, and the fact that it can throw right and left hand pitches is a bonus.

If you’re serious about getting that swing right, then get this pitching machine as it’s a worthy investment.