The Jugs Instant Screen was developed so that you could hone your hitting.

As any baseball player will tell you, the secret to a consistent game is practice, and that’s what this screen can do for you.

A quick look around the Internet shows that it’s quite popular with a lot of people, but does it really deliver the goods? 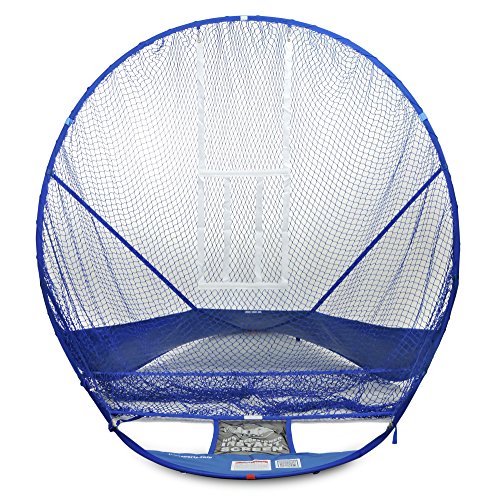 ==>> Learn all about this screen here

Features of the Jugs Instant Net

The Jugs batting net has several features, but the most notable is its versatility. Once you’ve set it up you can use it not just for hitting but also for tee drills.

You can also use this Jugs pop up net for soft and short tosses as well.

The net also comes with a nice carrying bag, handy for storing the net in case you decide to carry it along with you.

In fact that’s one of the best things about this screen, as you can bring it along anywhere you want to go.

The unit is constructed from lightweight but very durable spring steel, so this isn’t something that will break down after you use it for a while.

This has long been a complaint among customers who use hitting nets. Jugs seems to have taken care of that problem here. In short, this is a net that you can expect to use for a while.

The entire thing measures 8 by 7 feet (W x H) and weighs only 14 lbs. very light when compared to others out there.

The net also folds into a nice 30 inch circle and there’s also a one year warranty on the product. If there’s a problem within that time period you can have it repaired for free.

Usability of the Jugs Instant Screen

Setting the net up is easy as noted. If you have problems you can just go to the official website where there’s a video showing you how it’s done.

When the screen is in place you’ll see the strike zone marked by the red lines, and you can start tossing those balls.

Because of its durable built, you can throw as hard as you want. With the Jugs screen you don’t have to worry about breaking any windows.

For such a powerful and versatile screen, the Jugs is still light and should fit in a car trunk easily.

Apart from being easy to set up, the practice screen is flexible enough to be used for high school and college baseball practice, and even the Minor Leagues, it’s that good.

Thanks to its durable construction kids and teenagers can throw their hardest on the net without worrying about damage. It’s also ideal as a ball catch for hitting pitches.

The strike zone really does a good job assisting the pitcher find his groove, and when you’re facing the screen, it gives the hitter a nice target. Learning how to fold the screen down takes a bit of time, but it pops open nicely so there’s no chance it will just fold down.

As far as quality goes this is top notch. More than anything else, the Jugs screen ensures you won’t be breaking any windows by using this.

in the picture: The Best Instant Screen

In addition, the screen isn’t going to age or break with extensive use.

The Jugs hitting net has a lot of positive features that have earned it praise from many customers.

While the Jugs net has received a lot of positive reviews, it isn’t perfect. If you’re going to buy this product there are a few potential drawbacks you need to know about it.

What Customers Say About The jugs Instant Screen

Most Jugs s0100 instant screen reviews have been positive so far, with Anthony of Chicago saying the net has become an “integral part” of his baseball training. Another reviewer, Mark, says the Jugs net is very easy to set up and it works as well as advertised.

Jonathan of Oakland wrote a detailed review of the net on his blog, and he says:

“This net is perfect for hitting balls, and the strike zone design is just right for the practicing player…easy to set up and open, and it’s just the kind of training equipment I was looking for. I also have to say that this is a very sturdy net… I use it every day but haven’t encountered any problem with it.”

Another positive review was posted by Ben of Indiana, who wrote that it’s “very convenient to use”, and that he uses it to improve his strokes.

Jimmy of Alabama had the same sentiment, noting the screen holds up well and is great for short tosses.
Another notable aspect of the reviews is a lot of people use it for actual baseball training. Yes, it’s ideal for casual play but it’s also a serious training tool.

These are just some of the reviews about the net that have been posted online, and based on these it’s clear that Jugs has produced a very good hitting net.

Although there are a few shortcomings, there’s no question that most of the customers who bought and are using the net are happy with it.

Conclusion on This Jugs Instant Screen

The Jugs Instant Screen isn’t perfect, but as far as practice screen goes this is one of the best out there. It’s the ideal screen / net not just for baseball but for tennis and other sports too.

The screen is nicely designed and the fact that you can fold the screen means it won’t get in your way.

Bottom line: if you want your throws in that strike zone, then this practice screen will be of great help.